So the final chapter of Knights of the Old Republic has come, and somehow, I expected it to feel a little more … final.

First, my review: I liked this chapter. Thoroughly. Unlike some of the previous chapters, some which felt like stalling and some which felt like three hours of walking in circles, and even unlike the previous chapter which had all of the action and plot moments I craved — but delivered nothing of the romance I longed for — this outing provided both the action and character development to sate me.

There were lots of character moments and moments of reflection, and the game didn’t make me grind through a million sky troopers to get to Arcann. It provided some minor bosses to slow me, but not frustrate me — and it even pulled out some new fighting mechanics to make the final showdown seem fresh.

What it did not do, however, was provide a thorough wrap up to the previous sixteen chapters. At the end of the chapter, some things have changed and there are some nice revelations, but when I zoom out I see that all of the same players are in the game and not much has changed for my character directly. I expected a little bit more of a shake up in the final chapter to help me feel like I’m progressing. After the chapter is completed there doesn’t seem to be any new things to do around the base either, which was a bit of a let down as we wait for the new DLC.

Getting into the spoilers:

With the tables abruptly turned and Scorpio now heading up the Eternal Empire, we see Vaylin and Arcann barrelling towards Odessen, since, as we all know by now — for Arcann it’s all about Daddy. He cares nothing for the throne itself and would throw the entire Empire away for the chance to confront his father — even if his father is a force ghost stuck inside a snarky, power hungry Sith lady with a space wife and no hair.

How do the siblings know about the alliance on Odessen? The god in the machine has literally told them. There is no truer deus ex machina than this, folks. Scorpio has seen fit to thrust the bad guys on the good guys and see what happens. I gotta hand it to Bioware, I didn’t really see this coming when I recruited this shiny gold bot, and I like her character motivation — to grant free-will to all of the droids fashioned in her design who she considers her children. As a brief aside, this plotline (aided by the letter that finds its way to me afterwards recounting the story of a Gemini droid who gets off her ship to stare at the sun setting over an unfamiliar planet for two hours only to get back on the ship and fly off) was moving to me. I like this idea, and I hope we don’t have to destroy all Scorpio has worked for. I’ve always been a sucker for this trope in science fiction and I hope the writers get to play with its implications in the next DLC.

Back to the chapter. What’s left of the Eternal fleet, plus the flagship carrying Vaylin and Arcann, are heading towards Odessen and with them the possibility of the total annihilation of the planet because, if there’s one thing that spells Star Wars, it’s a planet blowing up.

Our first character moment (starting the chapter off on the right foot I say) comes before we go over the plan. Lana and my aforementioned sith, Gossamyr, stop to chat before heading to the Gravestone. I choose the flirtatious conversation option which results in vague insinuation that flies directly over Lanas head. It’s ridiculous and adorable, which I swiftly point out. “Lana, you’re missing the point here.” The point is that we should be making out and, when Lana finishes blushing, we do. It’s funny, her character has changed a lot since we first met at the beginning of Shadows of Revan. I miss her unhinged adoration and insistences that the force was bringing us together. We did a lot of making out back then, and I remember Lana as more of a giddy school girl. She’s not like that any more, and I was hoping that over the course of KOTFE we would see her relax a bit. But people change and Lana has that typical Bioware ‘hardened’ thing going on — like Leliana if you let her get her hands too dirty. 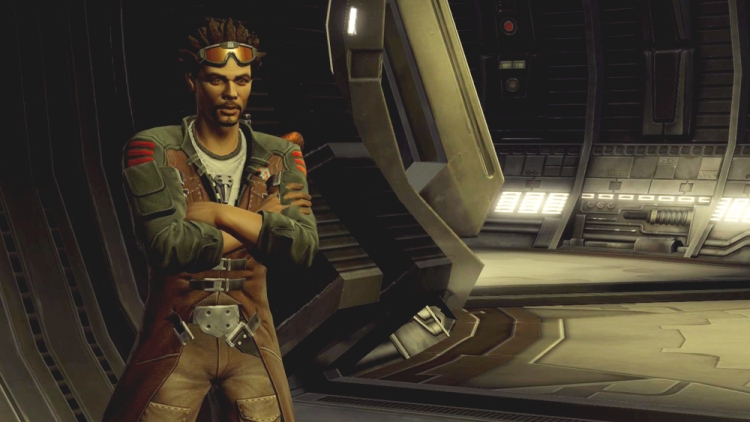 Next is Koth, who takes Gossamyr aside to thank her for everything she’s done for the Zakuulan people. It’s a really sweet moment and his insistence that her actions are the reason he stayed with the alliance feels genuine. I’m not sure what kind of monster you have to be to see some of these characters say goodbye, but to have Koth come out and say thank you feels earned. I don’t always like Koth, his values tend to clash with my sithiness, but I’m grateful for him in this moment.

Next, we’re on the Gravestone and Theron is excusing himself to go man the guns. I often wonder what life is like for Theron-mancers. Does he always up and leave you? Do you get special cut scenes of him looking wistfully into the distance to make up for the fact he’s not actually *there* when you’re being murderized? I guess this is where you guys would have your second kiss, but I’m like “See you dude, don’t *uck up!”

In any case, Lana, Senya and Gossamyr head into the ship while two chosen crew members cover shields and gun sabotage.

Vaylin quickly says hello. She makes it clear that while Arcann may have daddy issues, hers are all centered around Mother. She challenges Senya, and Senya splits the party. I really like Senya, she’s badass and I mean it when I tell her “You don’t have to do this alone.” It’s another nice moment.

Lana and I head through the ship, facing off against skytroopers and knights of Zakuul. There are a couple of named knights that must be defeated and they act as serviceable minor bosses but don’t prove too difficult. 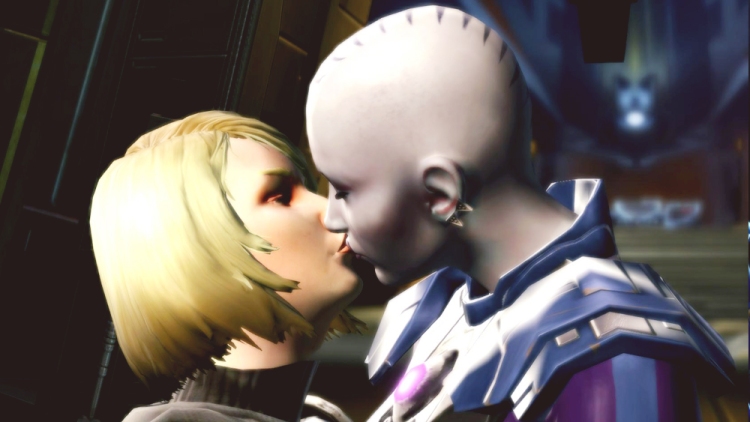 Just as we reach Arcann, a large contingent of skytroopers and knights arrive. Lana insists that Goss go on alone and face the emperor and gives a nice little retort to Gossamyr’s concern, “don’t insult me.” She’s not worried, but since this is the last chapter — I kinda am. She says something about how it’s Gossamyr’s destiny to defeat Arcann, and it’s her destiny to get her there. Gossamyr gets to say what’s in *my mind* (and heart, I’m a sap after all) “We’re destined for more than that.”

I’m not tearing up, you are.

Arcann wants to talk to daddy and Gossamyr is not feeling it. She’s pretty sure that she kicked the emperor out a while back even if I’m not so sure. Arcann has his doubts and when he corners Gossamyr with a swinging light saber a blue glowy force shield stops his blade. Now no one’s sure if Valkorion is showing up, but luckily we actually learned something in Visions in the Dark and the training of Darth Marr and Satele Shan summons this crazy shield (??) for Gossamyr to absorb Arcann’s force powers (??). I love that Bioware is finding new ways for us to battle our bosses which makes the gameplay feel refreshing and different then what’s come before, but I also don’t like change sooo… I’m also not ashamed to admit I ran in circles for a bit trying to figure out what I was supposed to do before I noticed the three temporary powers that had popped up. 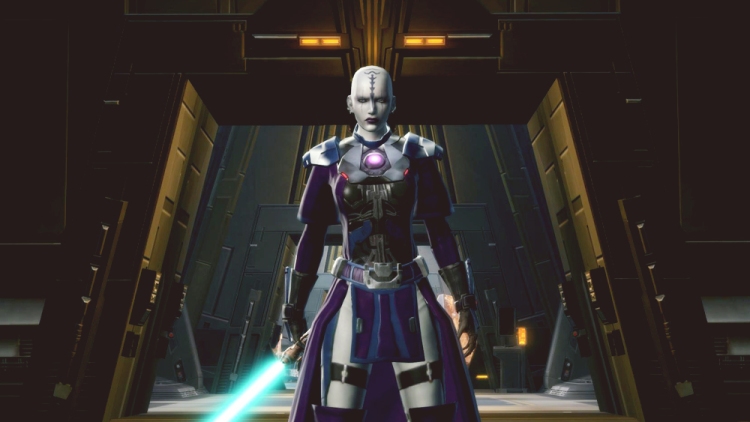 Now here’s where my expectations fall down just a little bit. Making the first real ‘dark side’ decision in awhile, I choose the option to outright kill Arcann. Again, this feels earned and just — but just as the previous 16 chapters are about to come to fruition, Scorpio starts attacking the flagship so she can finish Gossamyr off at the same time as Arcann. The flagship starts to combust, and Gossamyr leaves Arcann to his fate, having seemingly been crushed by falling debris.

It feels distressingly similar to all of the previous times we’ve faced the emperor’s kids. Dream sequences, boss fights that end in both parties leaving only to fight again — I expected more from the finale. Arcann’s fate is clearly undecided at this point, which leaves my bloodlust unsatisfied.

Lana calls on the com and tells Gossamyr to get her butt off the ship and I’m like, darling you’re alive! But there’s no dialog option for that.

Goss hops a ship and while she’s doing that — Senya is looking through the rubble for her son. She pulls Arcann out and he appears to be dead. Vaylin shows up (why are they just encountering each other now?) and Senya bemoans her mistakes as a mother, asking Vaylin to come with her and be redeemed. Vaylin refuses and leaps at Senya, but Arcann was listening to mom’s confession and force throws his sister away. Senya takes this as a sign that Arcann can be redeemed and escapes with him on a shuttle, leaving Vaylin to escape on her own.

In her own shuttle, Gossamyr has the option to go after Senya and Arcann and possibly shoot them down. I chose to let them go, I like Senya too much — but I have no clue if they escape either way. I feel like they’re too important to die at this point. Now this is an actually difficult decision. Despite the fact I’m not sure if the consequences are as real as I’m lead to believe, I agonized over it for a few minutes before *not* pulling the trigger. The aforementioned bloodlust left me wanting the anticipated explosion, but my affection for Senya’s badassery won out.

Koth is the only one outright mad with this decision and he throws a tantrum as soon as we’re landed. I roll all my former goodwill towards this character up into a ball and chuck it at him as he leaves.

The last scene in the chapter involves Vaylin approaching Scorpio on the Eternal throne. Scorpio willingly offers the throne to Vaylin, claiming it was never her intention to rule the empire. With all her talk about her children, and her offer to teach Vaylin as she takes the throne — it seems like Vaylin has chosen a new maternal mentor.

This is a finely crafted moment of payoff after Senya’s betrayal — the dialog and expressions are excellent.

Our enemy has shifted, not disappeared. Our enemy is perhaps more powerful with Arcann’s confused motivation out of the way. They know where we are, they know who we are and they know what our goal is. I look forward to see what role Senya and Arcann play in the announced Knights of the Eternal Throne.

I predict that Arcann may have a redemption arc in the next DLC, perhaps becoming an ally of the alliance (or appearing to do so). With Senya seeming more and more like a tragic figure, her actions both redeeming and unredeemable — I’m thinking she won’t survive to the end of the story. I also predict more returning former companions and hopefully Goss will be reunited with her space pirate husband at some point soon. What role does Valkorion have in all this? It’s hard to say — but they’ll have to amp up the feeling of vulnerability for the player character if they want to give his possession weight.

So that’s it for now! What did you think of Knights of the Fallen Empire?