New chapter #13 of Knights of the Fallen Empire, Profit and Plunder, opens with some continued saltiness between companions. No one likes each other here, and it makes sense because, hey, wasn’t it just yesterday we were all on different sides? Not only that, but everyone knows lack of money is the number one cause of fights in relationships and apparently we are, in fact, underfunded. Plus, there’s the matter of Kaliyo and Aric Jorgan missing in action since we sent them on that quest last chapter (you know the one… they’re doing… something important). Everyone is worried, and we need something to keep us busy.

Forgive my lack of detail, I was booted from the game several times during the first twenty minutes because of connection problems on my end and played it in small chunks over several days so my memory isn’t perfect.

At some point Hylo Visz, Alliance smuggling expert and all around badass, suggests we hire on a friend of hers. Turns out the friend is former Bounty Hunter companion Gault Rennow. Bounty Hunter is another class I have yet to play thoroughly and this was my first introduction to Gault. He’s an entertaining fellow and I look forward to continuing my Bounty Hunter playthrough. Similarly, Vette, former Sith Warrior Companion, is hanging out with Gault and it was an equal pleasure to run into her. Now, wouldn’t it have been nice to have Andronikos with them.

Gault’s plan is to commandeer the treasury ship of the eternal empire. It’s a pretty sweet plan. We pick up his crew, face a few pointless droid opponents in what feels like a pretty contrived combat scenario, and then meet up with Senya and Scorpio to discuss. Senya is going to wear Vaylins face and Scorpio is going to pose as her companion droid or some such, they’re waltzing onto the bridge and Scorpio is letting us onto the ship. Once Gault, Vette and I are in the Vault, we’re going to set off a ‘De-materializing bomb’ or … something made up like that, which magically turns all the bars of gold into gold vapor we can suck out through a tube. 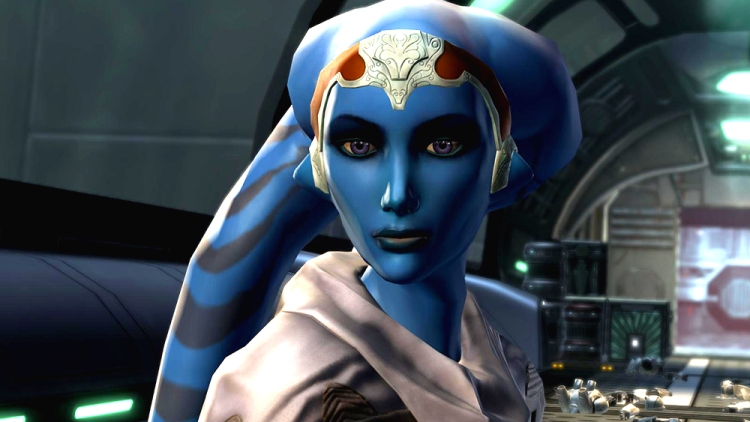 It all seems pretty simplistic, and no surprise Gault doesn’t have a clear getaway plan. It all goes off without a hitch up until that escaping bit. Annoyingly, Vaylin shows up and once again we avoid her rather than fight. The boss of the chapter ends up being a nameless, faceless skytrooper who does that thing half the bosses do where they put themselves in a defense bubble and hit you from afar while you fight a bunch of mini bad guys, then gives you a limited time to reduce his health in between waves. The combat was dull, but the location was pretty cool.

We end up rescued by Hylo Visz herself, and it’s nice to see her actually get to do something. Not sure if it was a surprise to anyone who’s played as a bounty hunter, but I was tickled pink to find out that Hylo and Gault were former ‘partners’ in every sense of the word. 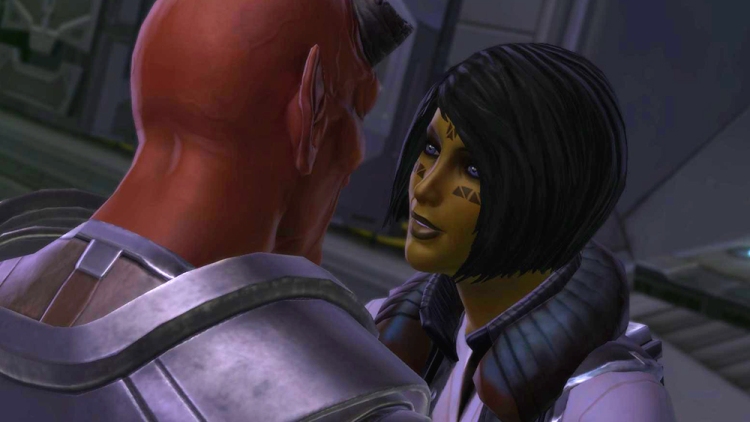 When they’re done making out, we head back to the alliance base where we’re given the chance to gain or lose influence with our companions. Turns out I don’t understand Gault enough to gain any approval here, but Vette and I are fast friends and I manage to make Theron and Senya happy at Scorpios expense.

Theron lets me know Aric Jorgan and Kaliyo have returned. Sad news though, the rest of Havok Squad didn’t make it and Aric is pissed. He’s blaming Kaliyo and I guess this is the magical “consequences for your actions” that we keep hearing about. I backed them both and forced them to work together, trying to make everyone happy, and now I’m feeling responsible. There’s a niggling feeling at the back of my mind reminding me that this is probably the result no matter what dialogue choices you made last chapter, but I still feel bad. That said, I manage to get out of the  conversation by being equal parts sensitive and tough as nails, approval all around.

Again, no romance content with Lana, and no mention of my pirate husband Andronikos. We’re getting down to the line, only a couple of chapters left, and I’m feeling increasingly dis-interested in the story. At the moment there aren’t any real consequences, the bosses have been pretty easy and the chapters feel short. I finished this one in about an hour. The biggest problem for me, though, is that the story doesn’t feel customized at all. I’m legit worried about replay-ability once I get my other characters up to level 60.

On the plus side, the addition of the Eternal Championship Arena seems pretty solid. I attempted it a couple of times and the bosses seem challenging and original. When I talked to Bowdaar, there was some legitimately customized dialogue where I explained I too was once a slave. It felt good for my unique origins to be acknowledged.

Well, what did you think? Leave your opinion in the comments!