I’m a huge Star Wars: The Old Republic fan, I’ve been playing it for several years and I have a few OC’s in the game that I love very dearly. What I haven’t loved? The new expansion that claims to be returning to “Bioware storytelling” and “choices that matter”. Knights of the Old Republic, Chapter 12: Visions in the Dark became available recently and it was another disappointing outing for my beloved Sith Inquisitor Gossamyr and her team of rag tag force wielders, Jedi sympathizers, gunslingers and smugglers.

When KOTFE is doing things right, it’s really right. There have been some excellent highlights since I started playing these extended chapters. The amount of female badassery, for example, spread between NPC’s like Lana Beniko, Senya Tirall, Scorpio and Vaylin is particularly impressive, especially when paired with a female PC.

In fact, I quite liked the first 5 or so chapters of KOTFE, meeting new characters, recruiting to your cause, coming to the new alliance base — it felt like the first third of Dragon Age Inquisition, complete with feelings of real vulnerability and the triumphant reveal of your new home. The latest chapters, however, have been somewhat lackluster.

First, the original 50 character levels of SWTOR were focused on multiplayer. You could tag along with your friends and experience different stories. In KOTFE the multiplayer experience is noticeably missing and the main story missions are all restricted to one player. It’s a good thing too, since with only one linear story the replayability is greatly reduced.

Secondary were the cut-scenes and stories themselves. Originally they were short, spaced out and the stories were different depending on the characters class, giving SWTOR an almost endless feeling of replayability despite often tedious fetch quests littering the in-between. Each class had a different cast of characters that would come together to feel like a family, a team, and each class would have different romance options for your character.

In KOTFE, they’ve eliminated a huge deal of the workload by creating a story that is the same across all classes. No matter your choices, your light or dark alignment or your original story — all characters now find themselves funneled into the same seemingly endless string of cutscenes. The huge cast of supporting characters has been whittled down and there are some faces noticeably missing from each original class story.

Most noticeably, from the romances. KOTFE introduces three romancable characters, two of whom you’ve met in previous expansions and might have already begun a flirtation with. Lana, Theron and Koth are your new choices and your previous romances are never spoken of or eluded too except for a single letter and a few early references. This is particularly troublesome to me because Gossamyr, my Sith OC, was married to a space pirate named Andronikos Revel. That said, Gossamyr  started a flirtation with Lana — whilst in full view of Andronikos — during the previous expansion Shadows of Revan. Now, Lana and Gossamyr are in a real relationship but there’s no sign — or mention — of Andronikos. According to what I’ve seen of the few relationships restored through returning characters, if Andronikos ever does return it will mean breaking up with either him or Lana, which doesn’t work with my character even a little.

I digress, I’m most salty about the romances.

Other problems with the new expansion, story wise, are that it’s confusing, oh and rather hard to care about.

I’ve just spent seemingly countless hours leveling up my character and now the new plot is removed from everything I was doing previously by both a 5 year time skip and a jump to a different galaxy. Where the previous stories centered around The Empire and The Republic, I now find that both have been destroyed in my absence and I have to care about this new political power I know nothing about.

The truth is, I worked really hard to become Darth Imperius and get a seat on the Dark Council and I couldn’t care less about your Immortal Throne, thank you. Not to mention KOTFE is trying to convince me all the other worlds — the ones I spent so much time traversing and know off by heart — are destroyed or taken over by Zakuul, but it’s rather confusing, and immersion breaking, that I can still travel to any of those worlds and see them exactly as I left them.

In any case, here’s where I’ll get spoilery about Chapter 12.

12 picks up … somewhere. It introduces the Alliance attempting to do … something, and begins by giving the Outlander a choice on who to back, Havoc Squad or Kaliyo. Lana reminds me that I can’t make everyone happy, but by all accounts I felt as though a middle ground between mayhem and perfection was reached.

It was my expectation that I would have to do something on this mission, but Lana suggests “maybe Valkorian could help us with this?” It’s a bit odd considering she got so pissed at me for using Valkorians power that time I saved her life, and made me swear never to use it again. I’m wondering when she’ll say anything vaguely romantic but no such customized content in this chapter. It feels like forever since there was a romance in this story. I dutifully do as my Sith adviser tells me to and head off into the wilderness(??) to speak to the emperor in my head.

Not sure why I had to go backpacking for this, I was happy to talk to him in my quarters or some such thing. Might make more sense if you’re keeping him a secret.

Out in the wilderness I pick up some supplies (a backpack??) and charge into the forest. Once I’m sufficiently isolated (??) I am somehow surprised that Valkorian betrays me and starts shocking me with force lightning. After this drama I wander through the forest fighting monsters trying to figure out how to get back to my team. This culminates in a fight with Valkorian that I was definitely winning when it cuts out midway.

Why do they never let us fight for real? It’s like a constant tightrope of keeping the bossess for the boss fights (ie. the final chapters) while attempting to establish just how powerful they are by letting us beat them with sticks. At this point the entire Valkorian clan feels like a family of cockroaches. 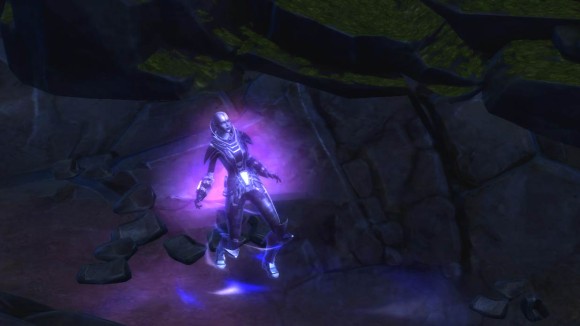 I fall unconscious even though I won the fight and wake up in a strange camp. The story is all “whose camp is this?” whilst dropping hints like “a locket with Theron Shans picture sits on a crate” which I suppose is for the benefit of those who started the game with a level 60 token and didn’t play the class stories. Honestly I feel like they should do more pandering to those who devoted a million hours to the game already.

It’s Satele Shan! Therons mom! But she’s acting weird and her voice sounds strange like she’s been taking Valium. I wonder if it breaks immersion to have so much interaction with Satele if you’re playing as a female trooper — both characters are voiced by veteran Bioware actress Jennifer Hale.

With Satele is Darth Mar, my Sith Inquisitors old war buddy and fellow Darth. We high five mentally even though he’s a force ghost and Gossamyr winks, “ahhh, you’ve converted Satele to the dark side!” she has a small world view.

Mar and Shan are talking all weird like I’m some newb, gotta learn now to fight the enemy like I’m their apprentice. I’m not into it. They want me to build a new lightsaber and I am, however, into new toys, so I go along with it. Once I get to the cave with all the lightsaber bits (the game is still pretending I don’t know why I’m picking up lightsaber bits so that later on I can say “You want me to build a new lightsaber?”, but it’s super obvious?) I discover Vaylin waiting for me.

Again, it’s obvious she’s not real (why would she be here? Where are Mar and Shan?) and that this is another test but this time I’m buying in. We’re both badass ladies and we look super-hot while we fight, surrounded by our purple force fields taking turns raining force lightning on each other.

Again, I win this fight pretty solidly but of course I didn’t actually *do* anything because Vaylin was a phantom. This is one of those times where I get exasperated — give me some real stakes, I’m tired of fighting ghosts.

Mar and Shan show up and are all “Guess what” and I’m like “YOU WANT ME TO BUILD A LIGHTSABER JUST SAY IT” and they do. As I stand over my lightsaber I’m given a choice to say some words, whichever I choose just might have something to do with my destiny and I choose resolve, because bitch can’t knock me down. Mar and Shan are silent and I take that as a blessing after all their creepy whispering. They’re obviously bat shit and I’m kinda grateful when they announce they’re gonna follow the force somewhere else. Good riddance. Peace.

I return to the alliance base expecting to have a chance to use my new blade in that mission we were discussing earlier but all I get is Lana jumping on me “WHERE WERE YOU”. I respond with dry humour, “Mar and Shan are besties and I think they’re on drugs, Valkorian almost killed me and then went somewhere other than my head.”

Lana delivers the best line of the chapter, “That’s a terrible lie, it must be true.” I want to kiss her on her pinched little face.

Meanwhile, Havoc squad and Kaliyo are carrying out my orders from earlier and it appears shit is about to go down for them, BUT I am not there to help out so it feels rather distant. Not to mention, I still have no clue what they’re doing. Something about the throne and communicating with the fleet. I wish I was more invested. None of this sounds like I can use my new lightsaber on it.

Their communication goes out and the chapter ends, leaving me wondering why I just spent several hours wandering the wilderness pretending to fight things that are in my head whilst my alliance could have used my help. At least I have a new lightsaber — too bad the stats aren’t better.